Quackery: A Brief History of the Worst Ways to Cure Everything

The freedom taken with logic, science, and general good sense in the rather (in)famous syllogism re: witches and ducks is not an isolated incident. Looking back over the history of medicine, up until quite recently, most doctors' reasonings followed the same merry romp through Nonsense Land. I know people get all worked up about cockroaches surviving humans in case of a nuclear holocaust but, frankly, looking at all of the ways humans have attempted to cure themselves with poisons, electricity, and boiling oil, we are pretty darn resilient ourselves. 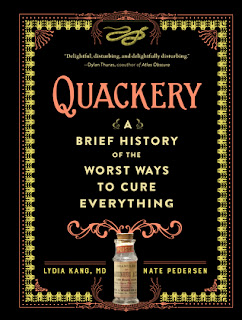 Quackery: A Brief History of the Worst Ways to Cure Everything is an absolutely delightful book. Were there times when I felt woozy, mildly nauseated, and even as if my limbs had turned into mushy noodles? Yes. BUT the freaky information was presented with such wit and panache that I somehow enjoyed being grossed out.

The authors made my heart of hearts leap with joy by categorizing and then subcategorizing all of the wacky "cures." I won't go through them one by one, although part of me longs to. You know how when you read a really good book or watch an excellent film, you go to a friend and tell them literally every awesome thing that happened (which is the whole plot) until they beg you to please shut up because they'd like to save a little mystique, hmm? So in lieu of the play-by-play, I now present some of my favorite quackish cures and associated quotes.

It's shiny! It's liquid at room temperature! We should use it on, in, and for everything! Right? Er, well, now we know that's a bad idea, because mercury is toxic. But in ye goode olde dayes, mercury was rather a workhorse. It was a particular treatment for syphilis, and the authors recount the sad tale of violinist Paganini, who, after regularly consuming mercury, drooled excessively and suffered from testicles the size of "a little pumpkin." It is slightly unclear whether the violinist meant that, combined, they were the size of a pumpkin, or whether each individual testicle was a miniature jack o'lantern, but in any case, let him be a warning to all. I can foresee a new cult of Facebook vitamin pushers encouraging the healing properties of natural quicksilver ("I lost ten pounds in four days! And all of my teeth!) as soon as Shakeology goes belly up. Remember: it might sound tempting, but gourdlike gonads are dreadfully unsexy.

I am a huge fan of Deborah Blum's The Poisoner's Handbook. Hey, NSA surveilleince reading this! How's it going? Not planning on murdering anyone--sorry to bust your bubble. Anyway, the amount of people getting offed by relatives with a bit o' rat poison was truly astonishing in the days before pathology could reliably finger the murderer. But arsenic has been used in other ways. Showing a depressingly White Default, aristos coveted pale, pasty skin and would do anything to get it--including applying arsenic-laced makeup. The formulations and uses for arsenic were pretty astounding. Kang and Pedersen observe: "Arsenic as medecine seems like bad judgment in pill form. Worse than, say, flossing with razor wire." Touché.

Here is a true story: My little brother and I were obsessed with the game Oregon Trail II. This was some cutting-edge gaming at the time. There were characters with real actors' faces! That moved! No pixelated cartoons here! Aside from this marvel of technology, we pored over manuals and strategy guides (yes, they made Oregon Trail strategy guides, like it was chess or backgammon) to figure out the best items to buy in the general store to ensure our making it all the way to the Pacific Coast. As any player of the Oregon Trail series knows, the sudden, random illnesses were a surefire way to cut your party in half in a matter of seconds. My brother and I figured out that if we were going for a speed game--getting everyone to Oregon, alive, and in the shortest amount of time--all we needed were oxen (meat on the hoof), flour (johnnycake for days), bullets (to help supplement the johnnycake), and an obscene amount of laudanum. Being young and naive, all we knew about laudanum is that in some quirk of the game, pretty much anything that happened to a character, health-wise, could be cured with laudanum. Mauled by a bear? Laudanum! Snakebite? Laudanum! Cholera? Laudanum! I remember trading hundreds of pounds of meat to fellow travelers from more laudanum.

And then my mom told us what it was. And we had been, inadvertently, the drug runners of the Oregon Trail. What a legacy.

So I kind of understand why doctors doled out opiates under various guises to their patients. They knocked you out, and it's difficult to complain of a tummy ache or a headache or broken bones if you are passed out, drooling the drool of the poppy eaters. But yeah, it caused some other side effects, too, and when doctors finally wised up to the fact that they had created a nation of addicts (o history, how you do repeat yourself!), they looked for a cure. And thought they found it ... in Bayer's nifty little drug heroin. Yes, the Bayer aspirin people, who thought that this new synthesized morphine showed more promise than aspirin, because it was " 'enfeebling to the heart.' "

Hey, yep, another poison touted as a cure! My very favorite old-timey use of strychnine is described in this passage: "Doctors Trosseau and Pidioux recorded the case of a twenty-five-year-old man who had for eighteen months been able to engage in only 'fraternal communication' with his wife. While under the influence of strychnine, the man was able to rise to the occasion, an ability he lost again after he stopped taking the drug." Later, a company marketed strychnine pills as giving you "night pep." I am going to start using the phrase "night pep" in casual conversation. 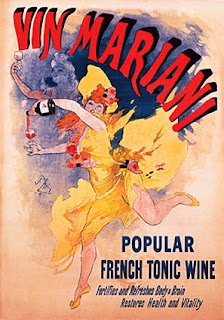 I mean, artistically, it's great. The movement, the color, the typography of "Vin Mariani." But did you know that this delightful concoction was coca leaves steeped in Bordeaux? Yep, cocaine-laced wine, for all your "vitality" needs.

Everyone went for mild exsanguination cures in the past--especially royalty. I am not a particular fan of Charles II of England, but his medical treatment does ask for a bit of sympathy:

"In 1685, Charles II of England succumbed to 'fits' while shaving. His fourteen physicians were under great pressure to keep him alive. Besides bleeding, the poor king endured enemas, purgatives, and cupping, and had to eat the gallstone of an East Indian goat. Plasters made from pigeon droppings were thoughtfully applied to his feet. They bled copious amounts from him again and again, even slitting open his jugular veins. At the end, he was left nearly bloodless before he died, though perhaps his soul was simply running screaming from the bird-poop poultices."

Okay, I have a lot of questions, to wit:

Did he shave himself? I thought that was something that required an underfootman of the royal razor.

Are gallstones common in goats? How do you know if the goat has a gallstone? Why an East Indian goat?

Okay, so if the idea of willingly rinsing out your bowels didn't make you cringe already, listen to this:

"The delivery system started out as more rudimentary, with hollowed gourds, tube-shaped bones, or animal bladders. Thoughtfully, some people were employed as 'blowers' to give the medicated liquids a little oral push to their dark destinations."

May all the iterations of The Doctor preserve us. Imagine: you're a peasant in, say, 13th century Europe. Your life already sucks. You are fourteen years old and have three children. You do not bathe for fear of washing the health off of you. There is poop literally everywhere. You are basically property, you can't read, and the bread you eat is like 1/3 gravel because milling for poor people does not have quality control. And then you get a summons from the lady of the manor. Lady Claremunda has a pounding headache, and someone has to give her enema a little encouragement.

Why do people dream about time travel? Why? WHY WHY WHY?

Humans are pros at being cruel to other humans and like every single animal they encounter. We are terrible. This is exemplified by doctors in the 1920s and 1930s, who cured men of being 'sexual flat tire[s]" by cutting open their patients' scrotums (scrotii?) and inserting goat or monkey testicles. "Randy goat nuts, when transplanted into men's scrotums, would surely restore male virility and youthfulness. They didn't, of course." Duh! One good thing came out of this, though. Someone created a drink called "the monkey gland" and it contains tons of my favorite things: gin, OJ, grenadine, and absinthe. I am a bit hesitant about asking a bartender for it, so perhaps I'll just give it a go at home. The drink, that is, and not the gland implantation.

These are just a few highlights of this truly delightful book. It also pleases me that diets are included in here as quackery, because they are. Anything that tells you to cut out entire food groups or that assigns moral value to food is a large, steaming pile of dung, and it's quite refreshing to read of a doctor who acknowledges that.

Lydia Kang also writes YA fiction, and I'm off in search of her books. Nate Pedersen is a librarian, and if I see him at any library conferences, I'll be sure to give him a high five, which is much less intimidating and creepy than erstwhile cures like jars of leeches or enemas.