Normally, my review goals do not consist of high-pitched screaming with a dash of flailing and a petition for a sequel, but I will make an exception for Sanctuary. 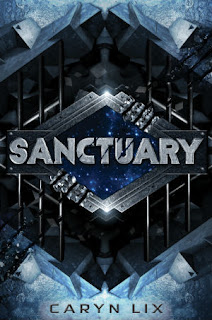 So--a moment of flailing to start out with, and then we'll get on to the review:

Ahh, that's better. All those pent-up feels to release.


Generally, I neither trust nor desire title comps when I am selecting a new book to read or an ARC to request. For some reason, review outlets are still trying to tie new, 2018 books with The Hunger Games or Twilight in order to reach teen fans. Newsflash: the people who read those books and loved them now have children of their own. Twilight is not modern YA fiction. So when I read comps for Sanctuary to Alien and The Darkest Minds, I was mildly skeptical.

Shame on me! This is the most delightful Alien-inspired space prison sci-fi book that you never knew you always wanted! I would say it's definitely more X-Men meets Alien. If that doesn't sound appealing to you, that's okay, because not every book will work for every reader (Ranganathan, library school, yadda yadda yadda), BUT. Consider:

I will say straight out that if you are expecting some philosophical "what is life?" book with Dramatic Capitalization and

--ah, this book is not it. But that's totally okay! I can only handle so much "Hi, I'm here to win all the book awards!" prose beauty. My favorite movies are Star Wars and Indiana Jones and basically anything set in space with ships/shooting/monsters. I'd much rather go see an action adventure film that lets my mind relax than something that's pretentiously arty and winning all of the awards ever. I have enough drama in my own life. What I don't have in my life is ALIENS. Futuristic onesies worn with kick-butt heeled boots. Space marines. And I'll gladly consume those as my film diet for the year.

ANYWAY. Even if you don't like any of those things, please give Sanctuary a shot. It's a ton of fun and a nice counterpoint to books that make you ugly-cry (which I also enjoy consuming, but not on a regular basis, because that's exhausting).

Kenzie is a junior security guard on Sanctuary, the corporate prison where her parents work as officers. She's got a lot to prove, not only to herself, but to her employer, Omnistellar. Actually, Omnistellar is more than just a company; in this version of the future, corporations, offering greater stability than traditional governments, offer citizenship to humans. Being a corporate citizen is to have the best of the best. Best healthcare, best jobs. And the best protection from the children who have grown up with frightening powers, powers that can neither be explained nor controlled. For everyone's safety, anyone who manifests an Ability must turn themselves in for confinement. The safest place to keep these menaces to humanity? Space, of course. Because in space, no one can hear you scream.

I HAD TO. I DID. It was a compulsion.

But since Kenzie's parents are model Omnistellar citizens, she is under a lot of pressure to prove herself on her own merits and earn her citizenship. Mom is the commander of the station, and her dad, well, he was an officer as well. But now he just dropped a bombshell: he's going back to Earth and he's not coming back. Her parents are splitting up and there's nothing Kenzie can do about it, and it's tormenting her. So when the alarm goes off, signaling a prison break and airlock breach, she doesn't worry too much about it. It's probably a drill, but maybe this drill will prove to her parents that they work together well as a team. No such luck--in either quarter. Kenzie notices something odd as she's monitoring the vid feeds--the oldest trick in the book:looping video to hide what's really going on. The teens she sees in the feed from the prison look so normal; they have powers like pyrokinesis and invisibility. The anomalies need to be in there for everyone's safety. But after the drill has ended, Kenzie sneaks down to the prison levels to reassure herself that the looped feed really was just a creation of the AI simulation. And to get a glimpse of these supposed monsters she's guarding.

Sanctuary is shaped a bit like a top, or a mushroom, or a golf tee--the guards live in the bubble on top, while the prisoners' quarters are in the spire jutting down (or "down," since we are in space and direction is Not Really A Thing there). Down in the detention levels, Kenzie creeps into Sector 5 to see the prisoners from the looped tape--Hu and Danshov. Just to be sure that the prisoners really are in there--that this really was just a drill.

After a tense exchange with the infuriatingly handsome Hu, Kenzie sneaks back upstairs and hopes things will return to normal. Riiight. Instead, her dad hops the next shuttle back to Earth and Sanctuary receives a distress signal. Kenzie's mom sends Rita, a seasoned guard, to investigate. And then, as it is wont to do, all hell breaks loose.

All radio communications (including those with Earth) cut out. The prisoners, somehow, break free in Sector 5. The station is locked down and under-staffed, so Kenzie goes to check on the prisoners, whereupon she is immediately taken hostage.

Now, apart from the whole isolated-in-space strategy, Omnistellar isn't taking any chances with the super-powered prisoners exercising said powers. They've developed a chip that neutralizes the abilities, and if you try to take it out, it generates the most agonizing pain imaginable. Besides, where would prisoners get anything sharp enough to dig it out with, anyway?

Dear corporations: please continue feeling unsinkable in everything you do, since that leads you to overlook the flaws in your products. When they start to take over the world, at least we'll have a small exhaust port to use to blow up the Death Star. Your hubris is our hope. Thanks!

Kenzie isn't particularly worried about the whole hostage situation, since she's confident her mom will negotiate to rescue her. Except, she doesn't. Mom cuts Kenzie as an acceptable loss, and the scales begin to fall from Kenzie's eyes. Sure, a bunch of the teens have unsettling powers, and others are just plain homicidally angry, but wouldn't you be extremely angry if all you ever knew was prison bars? Some of the kidlets in prison are just that--kids, and the teens were captured and incarcerated while very young. Others were handed over to Omnistellar by their parents. When there's a drill, the floor pulses with an electric current and the only safe place is their cots. They've become children raising children, generations abandoned by the adults who fear them.

Now, that's not to say they don't do some ... morally questionable things. But, still. Kenzie finds herself drawn to them and their cause. And Hu, AKA Cage. Because, as she notes, she's a girl and he's a guy and they're both attracted to each other so why not?

Side note: this is a very refreshing view in YA literature. It's something that's becoming a bit more common, but instead of the "I don't know why I like him and his glistening abs" routine, Kenzie frankly acknowledges that he's attractive and hormones are very powerful substances. In the words of Robie Harris, it's perfectly normal. Cage and Kenzie's relationship is interesting in that it reverses the usual YA friends-to-lovers trope; here, they are attracted to each other physically first, and then become friends. I like it!

But there's another problem (aside from the whole Omnistellar-is-totally-going-to-kill-them when they get to the station): the teens in levels 1 through 4 are simply ... gone. There's no blood to indicate a struggle; no obvious damage to the structure of the station. So where did they go?

This question is answered when Kenzie sees her mom get taken by ... a thing. A ... xenomorph, shall we say? A very-non-human monster. And now, the threat of getting court-martialed is a tiny, tiny speck of worry in the big picture of Killer Aliens. Sure, the teens have powers, but even super speed, pyrokinesis, and invisibility seem to be no match against these creatures.

Too often, reviews compare a book to a roller coaster ride when it's really more of a jump scare or a sudden drop. Not Sanctuary: this is twists and turns and sneaking and fighting one right after the other. There's no letup, and I was breathless as I rushed to the end. I need another book in this series! Unlike many other plot-driven books, Caryn Lix has crafted a cast of interesting, nuanced characters who are a refreshing mix of flawed and special; scared and heroic. Teens who loved Illuminae and Nyxia and Across the Universe are going to gobble this up--it oozes adventure and fun like a xenomorph oozes acidic saliva.


I received a review copy of this title from Edelweiss.