A Skinful of Shadows

Francis Hardinge could write about the most mundane and brain-numbing topics--paint drying, let's say, or perhaps the social habits of tax auditors--and she would weave a narrative full of magic, menace, and sly humor. And I would read it and recommend it, every time. 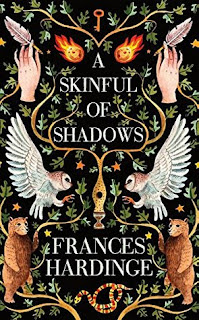 A Skinful of Shadows is set during the reign of Charles I of England and the English Civil War (which I studied in my History of Revolution seminar in college but let's face it, that was a long time ago and also I spent more time in the class trying to get the guy obsessed with Karl Marx to just shut up and also not talk about how "the Jews control money," especially when our professsor was Jewish). Whew, sorry about that little parenthetical aside. I guess I have more resentment about that class than I had previously thought.

Anyway, the English Civil War was about ... a lot of different things. Monarchical versus Parliamentary powers, the good ol' Catholics v. Protestants struggle, France maybe taking over England by marrying Princess Henriette-Marie to the king and using her sooper seekret stealth Papist powers to corrupt the throne ... yeah, lots of stuff going on there. Although it's obviously an historic socio-economic-cultural-your-modifier-here Event, it's not super glamorous. British writers have created iconic stories about the French Revolution, but not their own. But somehow Frances Hardinge manages to squeeze a bunch of intrigue and odd humanity out of this civil war. Wait, let me rephrase that: because Frances Hardinge is the magnificent writer that she is, the English Civil War is actually interesting for the first time in forever (no offense to the British).

Makepeace and her mother, Margaret, live in the small town of Poplar, just outside of London. Hiding among fanatical Puritans may not be a fun way to live, but it is relatively safe. But Makepeace soon learns that the most haunting dangers may not come from restlessness in the city or townspeoples' suspicions, but from confused spirits recently bereft of body and searching for a new home. These ghosts will do anything to get inside of Makepeace's body, and so Margaret adopts the good ol' sink-or-swim approach, and locks her daughter inside an abandoned chapel near a graveyard whenever the nights are warm enough to rule out freezing to death. Terrified, Makepeace begs her monther for leniency, but receives none. As she builds the walls in her mind to keep the ghosts out, so she builds her resentment toward her mother.

But during a political riot in London, Makepeace's mother is trampled, then shot, and all her daughter can think of is her eerie statement "You'll be the death of me," which seems to have come true. Now, all she has is the name of the estate her mother fled while pregnant--Grizehayes. Aunt and Uncle are more than happy to fob her off on a noble family, particularly after Makepeace savagely attacks and wounds two men staying at the local inn, for no apparent reason. The white-haired man that Makepeace had been following in London shortly before her mother's demise reappears to whisk her off to Grizehayes.

Grizehayes is not the most welcoming of abodes. The ancient family of the Fellmottes, of which Makepeace is a bastard but true member, has some dark secrets. They are aided in their underhanded dealings by the equally ancient but less aristocratic Graves family. Makepeace learns from her newly-discovered brother James that in addition to their marked cleft chin, Fellmottes have the ability to house and transfer ghosts in their minds. The cunning ghosts of the family have created a sort of immortality for themselves by transferring in groups to a new, fresh body when the one they currently inhabit becomes too decrepit. This is a Fellmotte's Inheritance, and it is not guaranteed that the owner of the original body will survive the mental invasion of six ancient and cunning ghosts. Wild oats like James and Makepeace are gathered up from around England to serve as "spares" in case anything should happen to a legitimate and titled Fellmotte.

James constantly tries to escape before he is turned into a soul receptacle for his foul-tempered ancestors, but he is hasty, while Makepeace is a plotter with a cool head. Except for Bear. She realizes that she has picked up a spectral tenant in the form of a murdered dancing bear who had been cruelly used by his masters--the same two men she inexplicably mauled at the Poplar inn. Bear and Makepeace's minds begin to entwine, and he is a fully-drawn character in his own right.

From here, we embark on a pell-mell dash through treason, homicide, parricide (allll the -cides, y'all), double-crosses, double-double-crosses, and espionage. Makepeace figures that her only chance to be truly safe from her family is to get her hands on the charter with which the Elders and Betters are blackmailing King Charles. Only her golden boy cousin Symond has stolen it and defected to the Parliamentarians, leading his troops into an ambush and setting up events so that James receives an unexpected Inheritance on the battlefield. Makepeace escapes her own Inheritance, flees the estate, and sets off across the fields of England to reach her cousin. Of course, nothing is as simple as that, and you'll have to read the rest in order to fully experience the awesomeness of it all.

In hands less deft than Hardinge's, the intricate action juggling act and thematic web would have been a total failure; here, she performs literary legerdemain. Somehow, I would get so caught up in the mechanics of spying in the 1600s that I would forget that Makepeace had access to other people hanging out in her skull. You start to pull for the King, because the Parliamentary rebels have been doing awful things in the name of freedom and so forth, but then you realize that if the King wins, the Fellmottes win, so then you start pulling for the Roundheads. Blast, this is exquisitely complicated! Toss a sassy doctor, a Puritan soldier, and a mysterious saboteur into Makepeace's head (literally!) and you've got a winning story that will keep you on your toes until the very end. Metaphorically, I mean. If you'd like to stand en pointe while reading this, be my guest.

A Skinful of Shadows is no less dark than The Lie Tree or Cuckoo Song, but it is more epic in scope. Meeting more people means more chances to explore the variations of darkness of the human soul, and it's fascinating. I may not have the ability to keep souls in my body like some sort of supernatural
frat party, but I could identify with Makepeace's struggles. She battles guilt surrounding her mother's death, fear of her own abilities and the bear inside of her, and the pain of being disappointed over and over again.

This is another smashing winner from Frances Hardinge, and I am on tenterhooks waiting to see what marvel of a tale she'll spin next.