It is never a good sign when you attempt to write a book review and realize that you have blocked off all memories of the book in question.  Or that the book was so unmemorable that it just oozed out of my brain and into the ether.  I had to actually go check the Goodreads synopsis for Spindle Fire to remember what I was going to write about.  Er, rant about.  Because holy weird retellings, Batman.  I simultaneously have no words and many, many words.

We all know* Jane Austen's inimitable line about men in possession of large fortunes needing wives, and her categorization of such as a 'universal truth.'  I propose another such truth, but this one related to fantasy and fairy-tale retellings.


It is a truth universally acknowledged that the majority of books that retell fairy tales will be epic fails, so you should probably just go reread something by Robin McKinley instead. 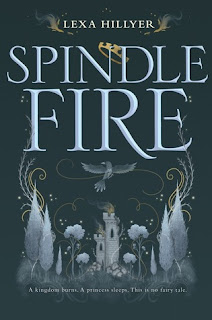 Aurora and Isabelle are sisters, and as this is a fairy tale retelling (despite what the cover of the book says), they must be as dissimilar as possible.  Aurora is beautiful, with golden hair and a winsome face.  Her temperament is always sweet, and she daydreams about romance and true love, like the stories she reads in the castle library.  Isabelle is illegitimate, dark-haired, sallow, and snappish.  Her talking throws Aurora's silence into relief.  Both princesses have, quite literally, lost some of their senses to fairy tithing (more on that in a moment).  Isabelle is blind, and Aurora is mute and also has no sense of touch.  Despite their differences, the sisters are the best of friends, and wish never to be separated.

You know what happens.  The Evil Counselors, who already hate Isabelle (also called Isbe) for being a bastard and a bad influence on Aurora, decide to marry off Aurora in a political alliance and send Isbe to a super-fun convent in Isolé.  The political jostling is due to the influence of Malfleur, the Night Faerie, who killed her twin sister Belcoeur and assumed rulership over LaMorte.  Aurora and Isbe live in the kingdom of Deluce, which has a vibrant trade but no military, hence the desire for an alliance with Aubin, Prince Phillip's kingdom, which has a massive military force.

Alas (?), Prince Phillip's caravan is ambushed en route to the wedding and he dies.  So does his brother, Edward.  Thankfully, the Aubinian royal family kept a brother in reserve, and Aurora can marry him.  Isbe decides that she's not taking any of this malarkey, so she runs away with the stableboy, Gil, with whom she has been in love for a long time, but they can't be together because ... I don't know, I guess even if you are a bastard princess, you still can't marry the help.

Aurora leaves the safety of the castle for the first time in her life to bring her sister back, but both sisters end up on very different paths.  After coming to a hunting lodge in the enchanted forest (there is always an enchanted forest, no?), Aurora finds herself transported to another magical land--the Borderlands of Sommeil.  She's rescued by a strapping lad named Heath, who takes her to the poor village where the humans cringe and scrape to avoid the gaze of the not-dead-yet Faerie Queen Belcoeur.  In Sommeil, her lost senses return, and she is able to speak and feel for the first time.  Yay!

Meanwhile, Isbe and Gil get shipwrecked after their transportation attempts to harpoon a whale, which is très Moby Dick, and Gil probably drowns, but whatever.  Hot prince alert!  Isbe sneaks into the castle via the sewers, and presents herself before Prince William (youngest reserve prince, release in case of eldest brothers being murdered) covered in effluvia.  Knowing my luck, this would also be how I would end up meeting a prince, or at the very least a super hot guy, so I feel your pain, Isbe.  Anyway, she reveals her identity, and he acquiesces to her demand that they parley about him becoming Aurora's true love. 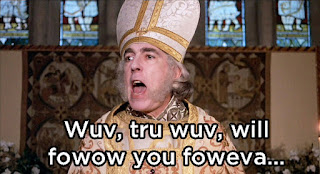 Riiiiight.  I'm sure that will work out.  Especially now that Isbe's twu wuv is conveniently out of the picture (for now), and she'll be traveling with Prince William in a coffin, all cozy-like.

Yes, so Isbe and William decide to run away from his country and get themselves smuggled back into hers ... because reasons?  I forget the reasons.  Oh!  Isbe doesn't know that her sister has gone after her, so she's taking William back to the palace to present as Aurora's True Love, which, as we all know, will break the faerie enchantment whereby Aurora's voice and sense of touch were taken.  Isbe starts falling for the prince, who is kind and funny (of course he is), and yet she doesn't even know if Gil, the guy she supposedly loved and ran away with, is even dead!  Whoooo smells a love triangle?  I do!

But remember, in the mean-meanwhile, that Aurora is in another dimension where her senses have been fully restored, plus she's totally falling for Captain Hunkalicious Heath, despite the fact that another girl in the settlement has set her cap for him already.  Aurora sneaks around and discovers ... stuff and has visions of what actually happened between the two faerie sisters.  It was a man (isn't it always?).  Although Charles Blackthorn originally fell in love with Malfleur, her absence from home, and her sister's constant presence, meant that he felt justified in throwing her over for her twin, Belcoeur.  When Malfleur caught the two together, her rage was extraordinary.  Belcoeur withdrew to a land born of magic and regrets: Sommeil.  Meanwhile, Malfleur rampaged through the human realm, creating soldiers of the dead.

The book ends on a pseudo-cliffhanger, with Isbe realizing that she loves William (duh) and will choose him, and Aurora awakening from her sleep after putting Belcoeur's crown on her head while in the alternate dimension.  I kept swiping back and forth on my Kindle, puzzled at the abruptness of the ending and sure that I had missed something.  Although I have many criticisms of this book, I do forsee myself picking up the next one just to satisfy my curiosity.

So, why don't I think this book succeeded as a fairy tale retelling, or even as a straight up fantasy?  The pacing jerks back and forth, making a run for the cliff's edge as we approach the end and leaving us teetering there, wondering.  I cannot make heads or tails of the geography of the land.  Where exactly are Malcoeur's holdings?  Why does only one country (Aubin) have military materials?  If a map is included in the final book, that would probably make this issue a bit easier to parse.  However, if I can't get a sense of the general geography in the book, that's due to storytelling and should not be fobbed off on a map.  Then, there was the illogic involved in having the fairies take gifts from the princesses instead of give them.  I'm very wary of the description of Isbe's blindness and Aurora's lack of the sense of touch.

First of all, although she is blind, Isbe has developed her other senses to an extraordinary degree.  She doesn't compensate with magic, which is the usual trope, but Isbe's blindness somehow allows her to navigate entirely foreign spaces with ease, because she can smell very well, or sense movement.  She's not a dolphin or bat with echolocation--even with her other senses compensating, I cannot believe that she climbs around on castle battlements without falling.

And then there's the issue with Aurora not being able to feel anything.  At one point, she notes that this extends to temperature, as she used to leave the window open and not notice that it was freezing cold.  One of the huge benefits of pain and discomfort is that they alert you to dangers to your body.  How could Aurora have survived a night in freezing tempertures without, you know, freezing?  How many blisteringly hot things has she touched because she has no sense of pain?  Wouldn't she be scarred?  Furthermore, if she truly has no sense of touch--no sense of pressure, how is she even able to walk?  Although most people take the ability to walk for granted--it's just something the body does when you tell it to move--it is very complicated.  You need to be at the right angle, moving at the right speed, compensating with your body for the forward motion, and actually be able to feel what you are walking on so as to get your balance.  If Aurora truly cannot feel, then I don't understand how she can possibly walk, much less climb around the castle.  Because she also has lost the ability to speak with her vocal cords, Aurora has developed a silent tapping language that she uses to communicate with Isbe (who, as we remember, is blind, and so cannot read lips).  Again, if Aurora has no sense of touch, creating a tapping language doesn't make any sense.  How does she feel what she taps out and what Isbe taps in return?

I know this may seem very nitpicky, but because of how the story revolves around the tithes taken by the faeries and the girls' quests to free themselves from the curses, it is very important that the tithing make sense.  And it does not.  If I cannot believe in a character's physical condition, then I cannot believe her motivation to change her condition.

Finally, I am pretty sure that the whole "true love" storyline is just that Isbe and Aurora have true love for each other.  Oh, did I see that somewhere else?  Maleficent, perhaps?  And yes, I know that films and books generally have nothing to do with each other (save Twilight and Fifty Shades, as examples), but I feel as though I've already read this story.

Spindle Fire needs several more intensive rounds of edits to create a story that I can believe in, with characters who make sense.  Also, if someone could get rid of the faux-French names I would be eternally grateful.  Obviously Malfleur (wicked/bad flower) is the bad faerie, and Belcoeur (good heart) is the nice fairy.  Sommeil is slumber, so it's clearly a dreamland that Belcoeur has created to shield herself from the world.  Deluce, the kingdom Aurora will rule, is a sort of funky Latinesque name that would be "Of the Light" or "Of the Dawn."  In contrast, Malfleur rules the kingdom of LaMorte (death).  Subtle!  Actually, it's just really distracting.

I would be very curious to have someone from Disability in Kidlit read this and give their impressions of how Isbe and Aurora's disabilities are portrayed.

I received an ARC of this title from Netgalley.

*If this is unfamiliar to you, stop right now.  Go get a copy of Pride and Prejudice.  Read it.  Come back and we'll discuss.
Labels: ARC clunky disappointing fae fairy fairy tales fantasy sisters YA