The Name of the Rose

In my younger, more pretentious years (hello college!), I assumed that since I had been able to read Jane Austen, Henry James (save me), Charles Dickens, Wilkie Collins, and Henry Fielding, I was more than capable of tackling The Name of the Rose. 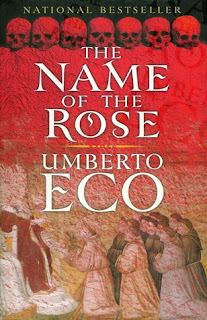 I was wrong.  There was Latin in this book.  No one speaks Latin!  I think both times I attempted this, I got stuck on the first page.  But this book is famous, and it's on five thousand "book you need to read before you die" lists, so I figured I've give it a shot.

The third time is indeed the charm, and I found this book to be a gripping page-turner, even though a bunch of it was in Latin and dealt with a bunch of sexually-repressed monks and their theological arguments.  You may want to have Wikipedia open while you read to try and figure out the different orders within the Church, and another tab for Google Translate for the more obscure Latin text.  Some books come with full translations, but I read mine as a cheapo ebook from Amazon, so there's that.

Describing The Name of the Rose as a medieval murder mystery may be the easiest synopsis, but not necessarily the most accurate.  Yes, there are murders.  Lots of murders. And there is a Sherlock Holmesian monk, William of Baskerville (whom I naturally called William, Hound of the Baskervilles, ha ha good joke, Eco!).  But.  This book is not, at its core, about murder.  It's about the passions and the schisms within the medieval church that lead to committing mortal sin.  It explores politics and poisons and the Avignon papacy.  Scholars and people who are a lot smarter than me hail The Name of the Rose as a masterful example of semiotics, but that's not really my thing.  Disclaimer: I don't really get semiotics.  I get linguistics, which is a subset of semiotics, but not the big philosophical thing.  Philosophy, for me, is best explained with vague hand-waving.

In spite of that, I enjoyed The Name of the Rose immensely.  You can read it on many different levels.  This was Eco's first book, and he wrote a very comprehensive postscript in which he addresses various questions and themes within the novel.  I found some of his notes to be illuminating, while others were, to be delicate, elitist.  He marvels that the common reader enjoys reading The Name of the Rose.  He wonders how these dumb-dumb readers of popular novels could ever "get" his fancy-pants book.  I plan on reading Eco's other books, but I hope he's mellowed out a bit with the them versus us mentality of readers.

The whole murder mystery basically is a framework on which the actually important events of the novel hang.  William of Baskerville, a Franciscan friar from England, arrives at an Italian abbey with his apprentice Adso of Melk, who is German(ic).  Adso is the narrator of the story, but he's telling it from a distance of almost 60 years, finally writing down the events of his youth on his deathbed.  This lends a fascinating level of unreliability to Adso's narration: are we seeing events as young Adso did, as old Adso does, or as old Adso thinks his younger self would have seen them?  Oooh.

William's purpose at the abbey is twofold: firstly, he is there to provide a buffer for the papal legation and the Franciscan delegates who are meeting to discuss the question of poverty (which was a Freaking Big Deal in the 1300s).  Secondly, Abo, the Abbot, needs William to discover the cause of a novitiate's death.  It looks like suicide, but the abbot suspects foul play.  It wouldn't look good if the Papal and Franciscan groups showed up and the abbey was an abattoir.  Unfortunately, that's exactly what happens.

Initially, it looks as if the first victim, Adelmo, was murdered for looking at specific texts in the library.  But could it have been jealousy?  Wide-eyed Adso learns a lot about "brotherly love" in the abbey.  Adelmo used to be the lover of the foreign and extremely cagey librarian Malachi, but lately, it seems, he took comfort in the arms of a younger brother, Benno.  Did Malachi kill Adelmo?  Did Benno?  Did Adelmo feel intense regret for his sin and thus commit an even bigger sin that would damn him to Hell, that is, suicide?

William and Adso quickly realize this is not an isolated tragedy when another brother is found floating in a basin of pig's blood.  Then there's another murder ... and another.  The abbey's herbalist, Severinius (one of my favorite characters--I have a soft spot for herbalists), notices that the dead monks have discolored fingertips and tongues, indicating poison.

Then there is the mystery of the library.  It's a forbidden place, and even when entered, foils even William's genius for puzzles for a moment.  The library is a labyrinth, and only the librarian possesses the key to navigate it.  We all know that Malachi is not going to spill, so William and Adso must solve the mysteries of the labyrinth themselves in order to gain access to the mysterious room at the heart of all the murders: the finis Africae.

For me, the oddest and most incongruous plot point had to do with Adso and the nameless peasant girl with whom he has sex in the kitchen.  This whole scene is written using mystical language and it felt so random to me.  I felt ... squicked out.  And sad for Adso.  He's so sheltered and so repressed that the only way he can describe physical love is by using spiritual metaphors.  (Also, given the amount of people either having sex with the peasant girl or with each other, how was this abbey not full of STIs?)  Adso then "falls in love" with the nameless peasant girl, but William hears his confession and absolves him of sin.  This is extremely lucky for Adso, just sin and get absolved, rinse and repeat.  I understand that God is merciful, but the whole "sinning with impunity because you know you'll get forgiven later yay!" thing has never made a lot of sense to me.  Plus, no one thinks to ask the peasant girl for her confession.  She is wicked because she is female.  She's probably sent straight to Hell (also, she's burned as a witch, so there's that) because of her sin, but Adso gets off scot-free.  I know I'm applying modern sensibilities to centuries-old tradition, but it was hard for me to like Adso at all.

Between my French history courses and intensive study of Dante (what can I say?  I'm a nerd), I felt relatively comfortable navigating the political climate involving the church of the 13th and 14th centuries.  That doesn't mean it makes sense, though.  What really strikes me is how all of the middlemen of the church knew that the pope, in this case, John XXII, was ridiculously corrupt, but figured, "Well, it's what we've got."  Plus, the Pope was generally always in conflict with the Holy Roman Emperor, in this case, Frederick of Prussia.  Everything about the Church revolved around consolidating political power and enriching the coffers.  No one really cared about the common people, as demonstrated in William's explanation of the function of the general flock of sheep.  As an outsider, it's both fascinating and infuriating to read about how men who should have been teaching people about God, as was their mandate, instead spent years debating whether or not Jesus laughed.

Eco has a bucket of red herrings that he throws at the reader and at William.  Although William devises several workable hypotheses to explain the deaths, the point of the book is that life is chaotic and cannot be explained neatly.  I was able to make an educated guess as to the murderer's identity about halfway through the book, but I couldn't tell you why he was murdering.

This is definitely a love it or hate it book, but it's one I would recommend that everyone at least try to read once.