Baking is one of my very favorite pastimes.  One might think that because I have Celiac, I wouldn't be much of a baker.  I'd like to think I have some skills, though.  Besides, if I want a cinnamon roll or a double chocolate chip cookie, I'll have to make it myself.  And yes, I adore carbs, so Baker's Magic was a mouth-watering, deliciously fun fantasy story. 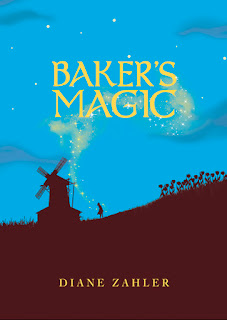 Diane Zahler wrote some of my very favorite elementary school-level fairy-tale retellings, like Sleeping Beauty's Daughter.  They're sweet, charming, and just make you happy when you read them.  I hope she writes more princess stories, but I was still excited to see a new (non-princessy) book from her pop up on Netgalley: Baker's Magic.

Bee has finally escaped the family who took her in after her mother's death in a shipwreck.  Really, why take in a child if all you're going to do is overwork and beat them?  See also: the Thénardiers.  I mean, they got money out of it; Bee's family got ... untangled fishing nets.   I guess some people just enjoy beating up on orphaned children.  Starving, exhausted, and clothed in rags, Bee finally arrives at the capitol city of Zeewahl from the coast.  Following her nose, she finds the most charming bakery with the most mouth-watering, delectable treats she's ever seen.  Each pastry is more luscious than the next, but the piece de resistance is undoubtedly the raisin-studded bun.  Bee can't help herself: she reaches for the bun ... and is immediately caught as a thief.

Instead of cutting off her hand or sending her to the galleys for twenty years, the baker, a bachelor named Bouts, gives Bee another bun to eat and a bed to sleep in.  And clothes when she wakes up! Master Bouts explains that she'll have to work for her place, but she'd make a handy apprentice.  Bouts could use the extra help, especially with his fierce rivalry with the cross-town baker, she of the permanently sour face and mood.  He begins teaching Bee the basics of baking, and something curious happens.  Whatever mood Bee is in when she bakes, she infuses that emotion into her baking.  Angry Bee?  Well, if you ate the torte she made whilst angry, you too will feel combative and cranky.  Calm Bee?  Soothing cakes will give you a sense of zen.

Master Bouts' bakery catches the notice of the Castle, where Princess Anika and her guardian, the reclusive and excessively cranky Master Joris, hide out.  Having lost her parents in a shipwreck, Anika is totally under Joris' control until she attains her majority.  But, since he is an evil mage, Joris has other plans: like marrying her off to an old and semi-toothless royal of a distant land.

Anika and Bee secretly become friends, and Bee hatches a plan to break Anika out of the castle and go search for clues about her father's death.  The blacksmith's son, Will, accompanies them, but not all goes as planned.  For one thing: pirates.

I loved the pirates in this book!  Master Joris has cut down all the trees in Zeewahl in order to plant tulips.  Because of this, people have no experience with fruits or other products that come from trees, like lemons, apples, or nuts.  And when the ocean rages with storms, it erodes the shoreline and will eventually spell doom for the country.  But all Joris cares about is selling his precious tulips, which the pirates promptly steal and sell at their own profit.  They're led by a highly temperamental yet kind-hearted woman named Zafira Zay.

From this point we go from pirates to useless mages to escapee hedge wizards with secret pasts to enchanted trees with no letting up.  It's ridiculously fun and very well paced.

Kids (and adults) will love this book.  It doesn't hurt that Zahler includes a recipe for Bouts Buns at the end--I have to try this recipe!