Rocket and Groot are the Han Solo and Chewbacca of the Marvel universe, and Skottie Young knows it.  There are so many winky nods to Star Wars in this that I ended up giggling uncontrollably.  I love a good Star Wars homage ... wait, can someone commission Skottie Young to do a Star Wars EU comic?  Pretty please??? 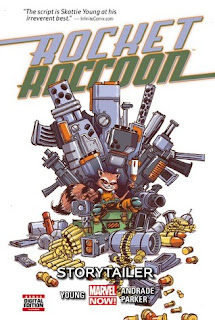 So, in the further adventures of the small, furry alien raccoon and his regenerating tree friend, Rocket's trying to pay off his old debts, but, of course, nothing ever goes as planned.  Rocket and Groot crash land on a really nasty ice planet *shades of Hoth* with angry wolf-like creatures that attack our dynamic duo straight off the bat.  Groot is wounded, and strangely won't regenerate.  It's so dang cold on that planet that Rocket's guns don't work, but they're saved by a mysterious ninja-like alien who loads them up on some snow Banthas and takes them back to her city.  It turns out that this woman is the princess, and her dad has an icicle up his yarp about letting her go out and try to get the cure for Groot.  See, Groot's been poisoned with a compound that stops his cells from regenerating.  OH NOES!  (Don't worry, he'll be fine.)

The princess, Jink, runs off with Rocket anyway (no, not like that--for once!) and they go to the lair of this really just gross-out awful beast to steal some yolk.  There is a way-cool Sharknado-style move and yay Groot!

Then there's a bit of an odd sequence where it seems like all the Avengers got really old (in my head-canon, the Avengers do not get old.  S.H.I.E.L.D. will not allow it.  Nick Fury will personally kick aging in the butt.) and Groot went crazy and got crazy big and started destroying the Earth and killed everybody.  THANKFULLY, it was all a sim, but that whole issue made me very sad.  I do not like to be sad.

But then we get more actual Rocket with LOTS OF GUNS and life is good again.  Instead of paying his fines like a good space not-raccoon-raccoon, he ponies up for The Book of Halflife, which is basically the book of his now-dead ancestors.  Unfortunately, the debt collectors have now made it a man (raccoon) hunt and Groot and Rocket are hanging out at a bar in Knowhere (Guardians base inside the head of a Celestial).  It's a brilliant homage to the cantina scene, with the bartender informing Groot "We don't serve his kind here." 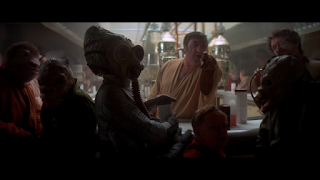 In an escape from Mos Eisley KNOWHERE excuse me, sorry, where did that come from?  Oh, just my delighted geek out session? Yes.  Anyhoodles, Groot and Rocket's ship gets caught in a TRACTOR BEAM *waggles eyebrows* whereupon this legitimately brilliant exchange occurs:

This is where Young's genius as a writer shines.  In addition to all the in-jokes, he makes it so that you know exactly what Groot is saying to Rocket even though we don't speak his language.  And Rocket is correct: a lot of people in Star Wars have bad feelings about it.  Whatever it is.

There's more story stuff that happens, but those were my favorite bits that I've now completely spoiled for you.  If you're not a Star Wars fan, you'll still like this, but where I collapsed into fits of giggles, you'll smile gently and move on.

Young and team totally shut it down with this series and I need them to do more magical, wonderful, geekalicious comics with Marvel.  Now!